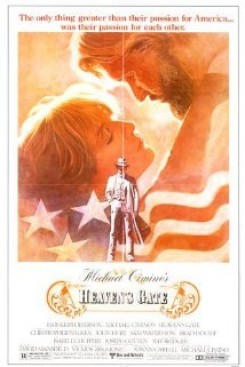 Director Michael Cimino's bleak western is based on events in Montana during the late 1800s. Sheriff James Averill (Kris Kristofferson) attempts to protect immigrant farmers from wealthy cattle interests and clashes with another man over the woman they both love, Ella Watson. Both men find themselves questioning their roles in a heated conflict between wealthy landowners and European immigrants attempting to build new lives on the American frontier.

The animal action in the film includes an actual cockfight, several horse trips, and a horse being blown up with a rider on its back. People who worked on the set verified more animal abuse, such as chickens being decapitated and steer being bled in order to use their blood to smear on the actors instead of using stage blood.

A lawsuit was filed by the owner of an abused horse on the set, against the producers, director, Partisan Productions, and the horse wrangler. The owner cited wrongful injury and breach of contract for willfully depriving her Arabian gelding of proper care. The suit also cited "the severe physical and behavioral trauma and disfigurement" of the horse. The case was settled out of court. AHA, which was barred from monitoring the animal action on the set, protested the film by distributing an international press release detailing the animal cruelty in Heaven's Gate and asking people to boycott the film. AHA organized picket lines outside movie theaters in Hollywood while local humane societies did the same across the country.