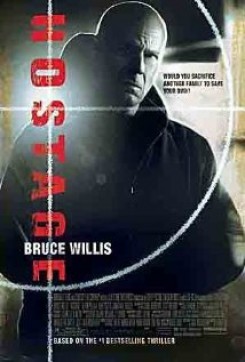 Just as former LAPD hostage negotiator Jeff Talley (Willis) has settled into his new life as a suburban police chief, the past comes back to haunt him when two brothers and their mysterious companion take a wealthy local family hostage. As the situation plays upon Talley's own insecurities, he must contend with a family in terror, a hostage with mob connections, and a criminal with a secret agenda.

In one scene, the Talley's pet beagle Breezy sits by the bedroom door while Jeff and his wife Jennifer (Horn) argue. Teenaged daughter Amanda (Rumer Willis) picks up a leash and calls Breezy to come outside. Amanda is shown later, leaning against a tree and petting Breezy.

A trainer placed Breezy in a sit-stay position as Rumer exited the apartment, then cued the dog to go with the actress when she called. After the door closed, Rumer fed the dog a treat. For the action, a trainer placed the beagle next to the actress and cued Breezy to stay while Rumer petted her.

For the scene with Amanda, her mother, and Breezy sitting at the kitchen counter watching the news, trainers put the dog on Rumer's lap and cued her to stay.

A stuffed animal ("stuffy") was used in the scene in which Talley encounters the murdered beagle in his apartment.

An enormous fish tank serves as a see-through room divider in Mr. Smith's master suite. This 200-gallon tropical aquarium was set up and maintained by a professional fish company in Chatsworth, California.