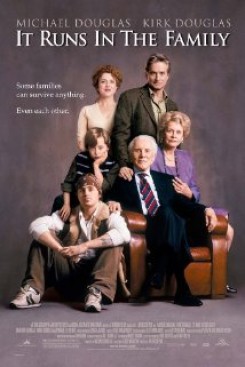 It Runs In The Family

It Runs in the Family stars three generations of the real Douglas family. The story follows the complex relationships in the dysfunctional Gromberg family. Alex Gromberg (Michael Douglas), his father Mitchell (real-life dad, Kirk Douglas), and his son Asher (real-life son, Cameron Douglas), along with his youngest son played by Rory Culkin, struggle with aging, bonding, and a general lack of communication between each other and each generation. The elder Douglas is a cantankerous and mean spirited father of the clan and his son fights to find a bridge between them in his dad's old age while seeking to forge a better relationship with his own sons.

In the film, the three generations of Grombergs try to bond by going fishing together. American Humane's Guidelines for the Safe Use of Animals in Filmed Media recommends that all fishing scenes be simulated. AH prefers that fake fish or animatronics be used in place of real fish for scenes in which a fish appears to be caught or caught and released. However, production requested that a live fish be used.

AH conferred with Massachusetts Department of Fish and Wildlife, the hatchery from which the live fish were to be supplied, as well as with a marine biologist. After consultation with experts, special protocols were developed for the use of a barbless hook for one specific scene. AH was assured by production that an experienced catch and release fisherman would be handling the fish, that a barbless hook would be placed in the appropriate place so that there would be no injury, and that the fish would be carefully handled and each fish would only be used once. According to the marine biologist consulted, the part of the fish's mouth where the hook was to be placed is strong and does not have nerve endings in the area. Also, the fish were not to be released into the lake selected as a location. Fish supplied by a hatchery for release into another body of water are subject to strict transfer rules per the Department of Fish and Wildlife. There is the possiblity of transferring deseases and the likelihood that the fish would not survive the new environment.

On the day the scene was filmed, several takes were done per the protocols agreed upon by production and AH. Unfortunately, during one take, one of the personnel handling the fish used a barbed hook and also released the fish into the lake. Since production did not adhere to the agreed upon protocols and AH could not determine whether this fish was harmed, we are rating the film Questionable. This is unfortunate in that one person's disregard of AH's animal welfare standards tainted what would have been an otherwise acceptable production.