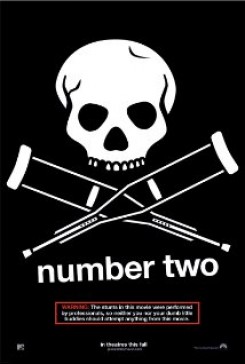 The whole Jackass crew returns to the big screen to participate in outrageously distasteful stunts that only they would attempt.

Safety Representatives were unable to directly supervise most of the animal action in this film due to the fact that some animal scenes were filmed internationally and the production did not establish a contract for our oversight. However, American Humane did monitor the running of the bulls, seen in the beginning of the film, and a brief scene with a dog and a horse, both of which complied with our Guidelines for the Safe Use of Animals in Filmed Media. The production provided a pre-release screening of the film, as requested by American Humane.