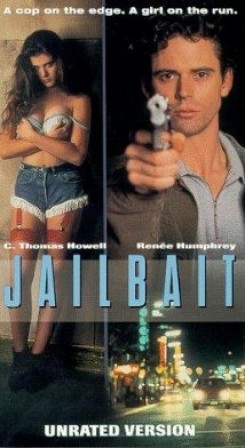 Jailbait is the story of Kyle Bradley, a 17-year-old mid-western girl, who sets out for Los Angeles after the death of her mother. She goes in search of her half sister, Merci Cooper, who, unbeknownst to her, is a hooker. Kyle arrives in L.A. wide-eyed and hopeful, but it is soon apparent to her that this is a harsh and cruel world. Within a matter of one day and night she witnesses a shooting, has been robbed, and is arrested for vagrancy. Lieutenant Sergeant Lee Tifler, her arresting officer, tells Kyle that Merci is wanted as a prime witness, or maybe even a suspect, in a murder that may be mob related. Lee asks Kyle for her help and together they set out to locate Merci. Little do they know just how deep they will become involved, both with mob dealings and, with each other.

Animal action entailed one scene in which a man is supposedly attempting to mount a live butterfly. He is seen sticking a pin through the wing, tearing off one wing, and then smashing the butterfly. American Humane was informed by the production company that no live butterflies would be used. It is apparent upon screening the film that a fake butterfly made of a thin cardboard material had been used. Since no live animals were used in this production, it is not being rated by American Humane.