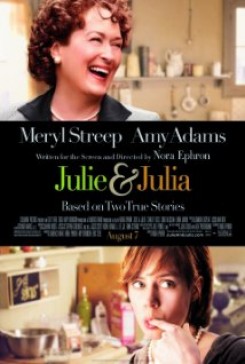 Throughout the film, Julie (Amy Adams) and her husband Eric (Chris Messina) have two pet cats in their apartment. The cats are seen performing such mild action as sitting on the bed or couch, being held or petted, standing in the background, or hanging around in the kitchen as Julie cooks. For these scenes, trainers placed the well-rehearsed cats on their marks and cued them to sit or stay using verbal commands, clickers or treats, or allowed them to walk around at liberty on the closed indoor set. The set was checked for hazards and deemed secure. Trainers stood just off-camera and often used verbal commands or held up food boxes to get the cats to look in certain directions. For one scene in which the cat sleeps on Julie's bed in the background, a stuffed animal prop was used instead of a live cat.

When Julie and Eric first enter their new apartment, they let their two cats out of their crate. The cats, which were familiar with each other, were well-rehearsed and accustomed to this action, and the actors were instructed on how to properly and gently handle the crate and the cats. Off-screen trainers called the cats to exit the crate or used food rewards to entice them to exit, and then allowed them to explore the apartment and do whatever came naturally. Trainers retrieved them between takes. In one scene, Julie holds a chicken foot, and the cat comes up to it and licks it. Before filming, trainers showed the cat the prop foot, which was lined with tuna juice to entice the cat to lick, and then used clickers to get the cat to walk from one point to another and lick the prop. For the scene in which Julie scoops the chicken entree from the stovetop into a dish, feeding the food to the cat, the food was a mixture of chicken, gravy and cat food, and was deemed safe for the cat's consumption.

Julie tries to cook live lobsters by setting three of them into a pot on her stovetop. The lid then pops off, startling Julie. Moments before filming began, three live lobsters equipped with removable bands on their claws were placed on a lined plastic lobster bag on top of a trash can. The actress used her gloved hand to remove them from the bag and place them in a prop pot that was rigged to look like steam was coming out. The lid of the pot had been pre-rigged with a monofilament line, controlled by an off-screen crew member during filming to appear as if the lobster popped the lid off. Between takes, the lobsters were housed in a cooler of ice, allowing them to stay cool and dry. They were retrieved after filming the brief takes and placed back in their natural habitat.

Due to late notification or limited resources, American Humane did not monitor some of the cat and lobster action or most of the dog action (other than a dog scene that was cut from the theatrical release).