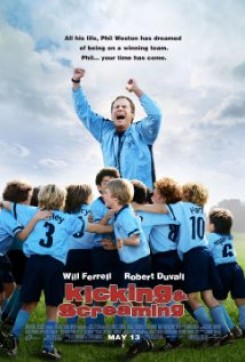 Phil (Will Ferrell) takes on the seemingly simple role of coach to his 10-year-old son's soccer team. Complicating matters is Phil's competitive father Buck (Robert Duvall), who also has a young son, from his latest marriage, and who coaches the boy on one of the league's most stellar teams. Even though the kids are only 10, Phil and Buck take their rivalry to a farcical level as each vies to win the league championship.

In one scene, Coach Phil passes out several caged finches to his players. Later, one of the boys and his dad go to the vitamin store to return the bird to Phil. Twenty finches were on call for these scenes. Trainers placed the birds in the cages and tied the doors firmly so the doors wouldn't accidentally open during filming. All the actors were instructed on the proper handling of the caged birds and the trainer stood just off camera to retrieve them when the scene concluded.

A large fish swims in a built-in wall aquarium. When Phil and Buck play darts in one scene, they hit the glass and the aquarium shatters, gushing water all over the floor. The fish wrangler placed a dog-faced puffer in the aquarium and replaced it with a prop fish before the aquarium broke.

As Phil and his players sit around a campfire and howl at the moon, some neighborhood dogs come out of the surrounding bushes and run up to them. Trainers stayed out of sight with the eight dogs of varying breeds and released them on the director's cue. The dogs were retrieved by their handlers when the director called cut.

In two different scenes, a boy named Hunter (Jeremy Bergman) is seen holding up a worm and then eating it. A wrangler instructed Bergman how to hold the wriggling live worm. The worm that the boy eats was actually made from Jell-O and rolled in cocoa powder.

The production provided documentation for the mounted fish and deer trophies hanging on a restaurant wall in one scene, as well as for the cow carcass that Phil chops up with a chainsaw.