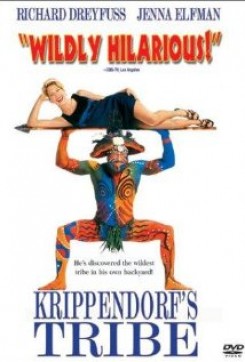 Krippendorf's Tribe is a comedy about James Krippendorf, an anthropologist, who, in order to keep his grant at the University, invents facts about a lost tribe he supposedly found.

There are several scenes where a hamster is present. In one scene, Mickey Dr. Krippendorf's son, is holding his pet hamster, which Mickey believes to be dead. Later he and the hamster are in his tree house and Mickey is attempting to perform an ancient ritual to bring his pet back to life. Mickey accidentally falls out of the tree and the hamster follows. The animal, upon landing on the grass, comes to life and starts running around in the backyard. Mickey with a rake in his hand chases the rodent around the yard in an attempt to kill it. This scene was shot in several cuts. A fake hamster was used for all scenes where the animal is supposed to be dead and falling out of the tree. During the chase scene, the rake is never seen in close proximity to the hamster and the camera is constantly cutting from the hamster to the rake as the rake lands on the ground behind it. In another scene, Mickey supposedly drags a pig on a leash across the stage during a school play. The trainer placed the pig on its mark and cued it with verbal and hand commands to "go with" the boy. Other animal action consists of a monkey, in which several scenes, rides on a woman's shoulder. Another monkey, supposedly in the jungle, sits in a tree. Pigs, goats, and chickens are in several scenes in the backyard of Krippendorf's house as he attempts to create a film of the tribe he was supposed to have discovered. In the beginning of the film, farm animals are seen at a tribal village, and a boy is holding a puppy.