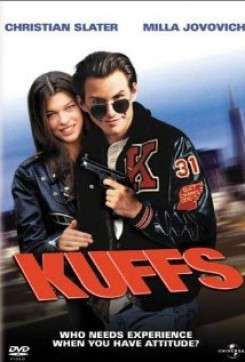 Kuffs is a story of humor, love, smuggling and murder. George Kuffs, an irresponsible 21-year-old, leaves his pregnant girlfriend. He goes to San Francisco to visit his brother, Brad, with the intention of borrowing some money so that he can go to Brazil to pan for gold, and escape his responsibilities. Brad is a Special Patrol Officer who "owns" a district in San Francisco. These districts are owned by private citizens who each set up a Special Patrol to stop crime in their communities. The Special Patrol is funded by donations from the residents. When George arrives in the city he takes his brother out to dinner. After they leave the restaurant Brad stops in a church before starting his shift, as is his custom. While George is waiting outside, Kane, a hired hood, goes into the church and kills Brad. George runs in and sees the killer standing over the body, but when the police arrive, there is nothing they can hold Kane on, as it is George's word against Kane's. After Brad's funeral George discovers that his brother has left him the district. Now George, in his own bungling fashion, takes over as boss of the Special Patrol and heads out to avenge Brad's killer.

During one scene George breaks into a Chinese laundry with a borrowed St. Bernard police dog. He opens a side window that leads to a laundry chute. The dog goes in first, sliding down the chute into a laundry bin full of clothes, which cushions his landing, and the bin rolls a short distance across the floor. The dog had been trained to slide down the chute (approximately five feet) and sit in the laundry bin, which was being held steady by the trainer off camera. When the dog is sitting in the moving laundry bin, it is being moved by the trainer from behind the bin to make it appear as if the dog's momentum caused the move. Once inside of the laundry the dog sniffs out some stolen art work. As George is looking at the paintings, four hoods enter, gag George, tie him to a chair, and place a bomb next to him. George's friend Ted, a bumbling policeman, comes looking for George. He discovers that George is inside the building when he hears the dog howling. Ted goes into the laundry and has just enough time to untie George before the bomb goes off. Ted, George and the dog jump through a plate glass window and escape just before the explosion. The plate glass window was candy glass. A stuntman jumped through the window and the dog followed after the stuntman while being called by his trainer off camera. The dog does not actually break through the candy glass.