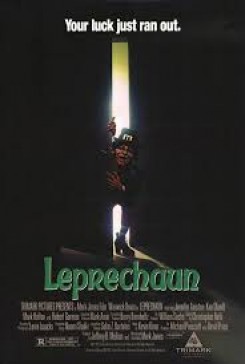 Leprechaun begins on the O'Grady farm where Daniel O'Grady has returned home to his wife, after a trip to Ireland. He's more than just a little intoxicated and informs her that, while in Ireland, he caught a leprechaun. When caught, the leprechaun was forced to relinquish his pot of gold and now the couple are rich! Mrs. O'Grady attributes the story to his drunken state and goes to make some hot tea for her husband. While Mr. O'Grady is changing clothes, Mrs. O'Grady notices the faint cry of a baby coming from inside his suitcase. She unlocks it and out jumps the leprechaun, screaming for his gold. He pushes Mrs. O'Grady backwards down the basement stairs, killing her. Mr. O'Grady comes out of the bedroom to find the leprechaun drinking tea. He realizes that the leprechaun has killed his wife and attempts to kill the leprechaun by shooting him. This only knocks the leprechaun unconscious. Mr. O'Grady throws the leprechaun into a crate and nails the lid shut. On top of the crate he places a four leaf clover, as this is the only thing that will contain or kill a leprechaun, and pours gas over the crate. He lights a match, but before he can throw the match onto the crate he collapses with a stroke. Ten years later, J.D. Redding purchases a home for himself and his teenage daughter, Tori. It's the old O'Grady place. While checking out their fixer upper home they discover the crate, with the four leaf clover still intact, and decide to open it. As they are attempting to open the crate they hear noises upstairs and stop to investigate, leaving the leprechaun still encased in his prison. The noise turns out to be the pair of bumbling painters that they hired. One of the painters had slipped off the ladder, spilling a can of paint over his head. Tori directs him to the bathroom where he can clean up. When he is finished and starts to return to his painting, he hears the cry of a baby. He follows the sound to the crate and accidentally knocks the clover off the crate, freeing the leprechaun. The leprechaun smashes out of the crate and his rein of terror begins again!

Animal action is minimal in this film. In one scene the leprechaun finds a cricket on his arm, he picks it up off his sleeve and pops the bug into his mouth and eats it. This was a fake rubber cricket. In another scene as Tori moves some boxes in the basement, a mouse pops his head up and scurries off. To accomplish this the mouse was simply placed behind the box and when the box was moved, he ran. In still another scene we see a spider in the basement walking on one of the beams. The spider had been placed on the beam by it's handler and merely walked from point A to point B.