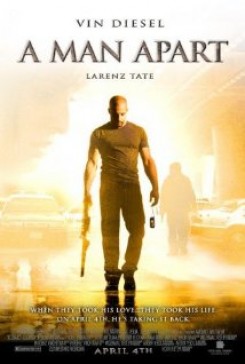 Sean Vetter (Vin Diesel) is a DEA agent making drug busts on the border between Mexico and the United States. He helps to capture a powerful drug lord, but the man who takes over the drug lord's position sets out to kill Sean. An attempted murder ends with Sean wounded and his wife dead. Sean swears revenge against this new drug lord called Diablo. He follows a trail that leads him through many crime-ridden locales and has several violent encounters with other drug world criminals as he seeks his revenge.

In one scene, Sean sits on the beach watching the sunset, and a flock of birds flies along the shoreline. These were birds that lived in the area already, and the filmmakers were lucky enough to be able to film them in their natural environment.

Sean and his wife have a cat in their house at the beginning of the film. The cat performs a few simple actions in the movie, such as walking across the room to Sean and playing with a ball. The action was mild and the trainer was present at all times.

In one scene, a Chihuahua is used to sniff out drugs on several vehicles. To accomplish this action, three trainers were used. One released the dog, one attached buzzers underneath several cars, and one was waiting to pick up the dog. The dog was trained to go to each of the buzzers in a series. During the wintry shoot, in between takes, the dog was given a sweater to protect him from the cold. The street was also heated to keep the dog warm.