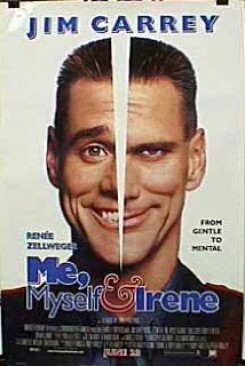 Me, Myself and Irene

In this comedy Jim Carrey plays Charlie, a mild mannered cop who discovers he has a split personality. He is able to keep it under control until he looses his medicine. If things weren't bad enough, both personalities fight for a young woman's affection.

Business Comes First One morning as Charlie leaves for work, he watches as his neighbor's dog takes a big dump on his lawn. The dog is a Great Dane named Fatima. The trainer walked the dog on the lawn several times before the filming so it would be familiar with the area. Production was given a time frame by the trainer as to when the dog would want to relieve itself. The dog was fed at the same time everyday for weeks, before this scene was shot, to promote regularity. When the time came to film the scene, the trainer released the dog and in less than three minutes the dog performed its task and the crew captured the moment on film. Live Cows Cows grazing in a field, provided a natural background as Charlie drives past. During the end credits, a cow wearing a neckbrace and bandages is shown standing in a field. The cow was released into the field and began to graze. Four trainers applied the bandages and neckbrace. The cow didn't seem to mind a bit. The trainers stood behind the camera making n oises, cueing the cow to look into the camera. Tarantula Action The tarantula you see crawling across Jim Carrey as he drives the car is real. The trainer hid in the back seat of the car and released the giant spider who crawled across our star and was immediately retrieved afterwards. Animatronic Animals Although some might argue that the two scenes that use animatronic animals are humorless and in poor taste; the cow that Jim Carrey beats up and shoots several times and the chicken that flaps as it "hangs out" are not real. Both animatronic animals were wired so they could move and appear to be alive.