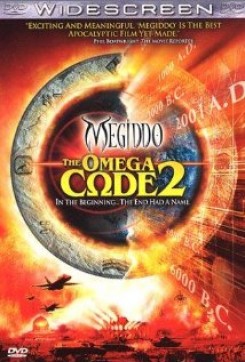 In this apocalyptic thriller, Michael York plays Stone Alexander, devil incarnate and eventual ruler of most of the not-so-free world. His brother, David (Michael Biehn)--who also happens to be President of the United States--is the only person that can stop his demon sibling from unleashing the gates of hell.

Sheep In the desert, a shepherd and his small flock of sheep walk down a hill. Trainers led the 11 sheep uphill to their starting position, placing grain on the ground for the animals to follow back down. On "action," a wrangler, who was dressed in costume as the shepherd, led the sheep--who were busy munching grain on the ground--back down the hill. Crew members provided borders on the set, ensuring that the sheep wouldn't wander away. Later, during the bombing scenes, the herds of animals were not actually near any explosives. Post production edited the action together to make the situation only appear precarious for the animals. Horses A little girl stands next to a white pony in the Italian cour tyard. Later, a young woman rides a white horse and trots up to a man who takes her reins to steady the animal. Also, single horse-drawn carriages pull passengers through the Italian town. Horse wranglers were on location to enforce safety guidelines and direct the mild animal action for these scenes. Cats The cats seen at the Colosseum in Rome actually live there. No extra animals were brought to this location, nor did production interfere with the resident cats. The bugs were all computer generated.