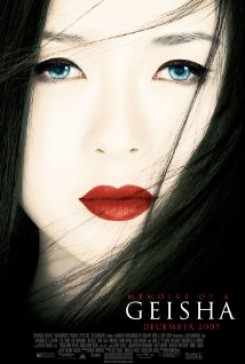 Memoirs of a Geisha

This lush adaptation of Arthur Golden's debut novel follows Chiyo from her early days as an impoverished orphan and maid, to her transformation into the renowned Kyoto geisha named "Sayuri." World War II brings about the temporary demise of this unique world of beauty and artifice, forcing Sayuri to again tap into the strength of her guiding element—water— and find a new path in life.

When Chiyo (Suzuka Ohgo) meets the Chairman (Ken Watanabe) on a footbridge over the Sonagawa stream, a dog travels across the background and a horse stands near the bridge with a harness attached to a cart. This very busy scene contained a lot of movement, with vehicles being driven as well as rickshaw carts. Wranglers took the horse from the actor between takes, and trainers released the dog for background run only after the vehicles had passed. As a safety precaution, the dog was kept on a leash between takes.

Although American Humane's Certified Animal Safety Representative saw the Pekinese named "Taku" on the set during production, she did not monitor any scenes in which the dog worked.

American Humane monitored no other animal action in this film.