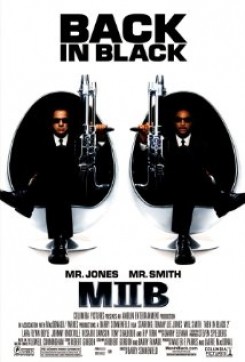 Tommy Lee Jones and Will Smith re-team as secret Agents K and J, aka Men in Black, who protect the earth from alien evil-doers. Moo-Shoo the Pug also reprises and expands his role as the talking and singing pooch, Frank.

Four Pugs, all shelter-rescues, were on-call for the part of Frank throughout filming. Mizo, Liberty, Chin Chin, and Moo-Shoo were each specially fitted for their MIB suits, which the dogs did not mind wearing at all. And although the spunky Pugs have lots of personality, they still needed help in the "talking" department, which came by way of computer animation.

Ever the diligent agent, Frank enters an office with an envelope in his mouth, walks to an empty chair and sets it down. The trainer put the empty envelope in the dog's mouth and stood off-camera using hand signals to cue the dog to walk to the chair and drop the envelope.

For Frank's scenes with the MIB, Will Smith and Tommy Lee Jones kept some doggie treats in their coat pockets and would reward the dog during the shoot with permission from the trainer. As a result, the dog happily followed the actors around the set, even after the camera was turned off. When the dog rode in the elevator with the actors to the MIB headquarters, special precautions were taken since the elevator actually moved. Before filming, the elevator was specially made by the crew and inspected by both AHA and the trainers. A piece of Plexiglas was put over any grates on the floor so it was smooth for the animals to step on. A trainer also tied invisible monofilament wire around the waist of the dog and one of the actors held onto the other end to ensure the steadiness of the dog. Once inside MIB Headquarters, the pooch trots over the raised walkway. A trainer released the dog to walk to another trainer nearby, while stunt bags were placed underneath as a safety precaution. Again, Plexiglas was placed on top of the grates for the animals' safety.

For Frank's car-ride, a trainer placed the dog with its front paws up on the window and then a fan was turned on so it appeared as though the wind was blowing, since in fact, the car was stationary. This was filmed in front of a green screen and the passing images in the background were added in post production. To enhance Frank's, ahem, doggy drool, the director decided to computer-generate saliva in addition to the dog's moving mouth.

When the car was actually moving, a trainer secured a safety harness to the dog with an attached leash and held it while hiding in the back seat of the car. The car moved slowly and traffic was cleared by Production. For scenes when the car stops and the dog jumps out the door and walks with the actor, the hidden trainer in the backseat would release the leash and harness and verbally cue the dog to exit the car when the door was opened. The actor made sure to slip the dog a treat on its way out.

As Agent J and Frank enter a Dog restaurant, Agent J tells Frank to sniff around as he goes into another room. Trainers stood off camera using hand signals to prompt the dog to move around. Some bits of dog food were scatted on the floor to encourage and focus the dog's attention.

Later, Frank runs from the long fingers of Lara Flynn Boyle and stumbles over a pile of aliens that are lying on the floor inside MIB Headquarters. The dog hides in the pile of aliens and communicates with agent J through a tiny headset. He is caught nonetheless, and is discovered bound and gagged. The pile of alien creatures were made of a non-toxic soft foam. The dog was prepped to walk and run on the foam pile. The headset, ropes, and gag-device were put on the dog by the trainer and fit loosely and comfortably on the dog.

At one point, Frank visits the talking worms. They all sit on chairs and talk while smoking cigars. While the worms were computer generated, Frank was placed on the chair by the trainer and trained to hold the fake cigar in his mouth and stay in the chair.

Frank pushes open an office door in the MIB headquarters and walks up to the men talking and shakes. The trainer left the door open just a crack and the dog was prepped to push it open and trained to "shake" on command.

A man walks up to a dog that is barking at what appears to be a strange-looking flower in a field. The flower turns out to be an alien, and as a space ship lands nearby and another alien emerges, the dog runs for the hills. The dog in this scene is a Chesapeake Bay Retriever. Filmed in front of a green screen, the trainer verbally cued the dog from off-camera to achieve the action. The flower, alien, and spaceship were added in post production.

During a brief scene, a cat stares at a woman walking upstairs from the basement of a restaurant. Bruno played the role of the sinister alley-cat. After placing Bruno on his mark, an off-camera trainer held up a piece of chicken to keep the cat's eye line. After the scene was complete, Bruno was rewarded with the tempting chicken.

The cockroach that crawls across the floor in one scene is a computer generated critter.