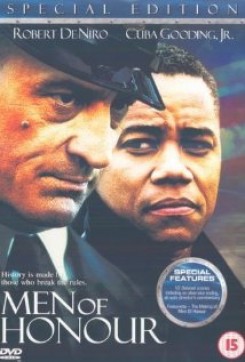 This drama is based on the true story of Carl Brashear, the Navy's first black master diver. The film documents Brashear's struggle and determination to triumph over the obstacles he faces.

Later, a little dog is placed into a bucket and pulled up with a pulley to the top of a tower where the Colonel is waiting for it. The Colonel takes the dog out of the bucket and inside with him. To ensure the dog's safety, the trainer had a harness inside the bucket. As the bucket was pulled up, a group of people stood directly below as an added safety measure. When the dog reached the top of the tower, the actor tipped the bucket away from the camera, unfastened the safety harness, and gently lifted the dog out of the bucket.