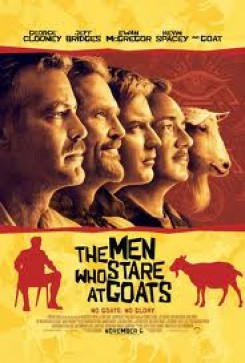 Men Who Stare At Goats, The

A reporter gets more than he bargains for when he meets a special force agent who reveals the existence of a secret military unit whose goal is to end war.

Gus (Stephen Root) shows a video of his two hamsters in a cage. The cage was checked ahead of time for hazards and set up with all the comforts two hamsters would need. The hamsters were placed inside and filmed acting naturally. For a shot in which one of the hamsters appears to fall over, the hamster was created with computer-generated imagery (CGI).

In a Russian lab, an experiment is being performed which involves kittens being burned with cigarettes and a mother cat in another room, hooked up to some machinery. There is a box of kittens on a nearby table, and a man holding a kitten begins to move a cigarette toward it. The kitten hisses at him. The cigarette never touched the kitten. The well-rehearsed actor, who was extremely cautious in keeping the cigarette a safe distance from the animal, began to bring the cigarette toward the kitten and then moved it to the side. A trainer stood just off-camera and retrieved the kitten afterward. The cast and crew allowed on set were limited and only a limited number of takes were allowed. The equipment hooked up to the mother cat consisted of lightweight props and the cat was comfortable with the action.

Goats (and a Dog)

The narrator describes "the goat room" and the camera pans across a room in which a lot of goats are standing around. One goat has a bandaged leg. The goats were placed in the room after the trainers checked it for safety. The bandage on the goat's leg was loose-fitting and the goat was unfazed by wearing it. Trainers stood off-camera and access to the set was limited to only necessary cast and crew.

When the narrator explains that this used to be called "the dog room," we see a man holding a small dog and a piece of equipment and the dog is licking the equipment. The trainer doubled as the actor holding the dog and cued it to lick the prop.

Several soldiers stand in a room with a goat tied to a stake in the floor. Lyn (George Clooney) sits on a chair across from the goat and stares at it. The goat stares back, then suddenly falls over, appearing dead. After checking the area for safety, a trainer brought the goat to the set and tied it to a stake in the ground. The trainer stood behind the actor, holding up food and toys to get the animal to stare in that direction. The shot in which the goat falls over was CGI.

As Bob (Ewan McGregor) and Lyn walk in the desert, they come across a goat and follow it up and over a sand dune to some water. The goat runs off and then the men drink from the water puddle. This scene was filmed in separate shots. A trainer placed the goat on its mark and another trainer, who stood on top of the sand dune, called to the goat and shook a bucket full of food. The actors followed the goat. The goat was then filmed in the same way going back down the dune and then again running off.

After leaving the hospital, Lyn and Bob enter a shed where many goats are being housed. They find Bill (Jeff Bridges) in a corner of the room amongst the goats. Later, Lyn goes back to the shed and opens the door and begins to shoo the goats out with his arms. The goats exit the shed and out of camera range in an orderly manner. Then Lyn carries a baby goat in his arms as he follows the herd until he is confronted by Larry (Kevin Spacey). Lyn sets the goat down and a couple of goats wander around in the background. This scene was filmed in separate shots. The goats were placed inside a shed-like set built by the production and inspected by the trainer before filming began. Two trainers hid inside the building with the animals, and four trainers and a herding dog stood outside the building with buckets of food to help guide the goats to some nearby holding pens. The actors were well-rehearsed with this action and careful where to step. The baby goat was placed in the actor's arms right before cameras rolled and the actor had been instructed on the handling of the goat beforehand. A trainer was there to retrieve the young goat when the actor set it down on the ground.

As Larry lies on the ground, a bug crawls on his hand and chest as he watches it and laughs. The actor was put on his mark after receiving instructions on the proper handling of the insect. A trainer placed the insect on the actor's hand and then his chest and stood just off-camera, allowing the bug to crawl at liberty and retrieving it after.

The butterfly that flies up in the air in one scene was CGI.