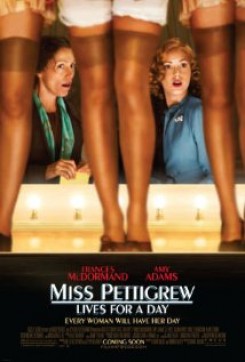 Miss Pettigrew Lives for a Day

Guinevere Pettigrew, a middle-aged London governess, finds herself unfairly dismissed from her job. An attempt to gain new employment catapults her into the glamorous world and dizzying social whirl of an American actress and singer, Delysia Lafosse.

As Guinevere (McDormand) walks down a street, she passes one pedestrian leading a horse by its reins, another pedestrian walking a dog on a leash and a third pedestrian playing fetch with his off-leash dog. The London street that this scene was filmed on is only open to pedestrians, so no cars were ever present. The horse was guided down the street by a trainer dressed in costume. The two dogs were with their actual owners, who doubled as the actors for this scene. The dogs and the horse were all introduced to each other before filming began. The action was well-rehearsed and the grounds were checked ahead of time to make sure they were safe to walk on. As Guinevere enters a building, she sees two women exit an elevator. One woman holds a small dog in her arms and the other woman walks a dog on a leash. Two French toy poodles were used in this scene. The actresses were both introduced to the dogs and instructed on their proper handling before filming began. A trainer handed the dogs to the actresses right before filming began and retrieved them afterward.