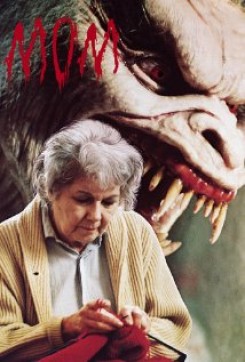 Clay has a rather difficult problem--what to do about Mom. She used to be a Norman Rockwell version of what little gray-haired mothers should be, spending her days knitting and baking. But ever since she took in a new boarder, she's changed. It seems the boarder craves human flesh and he's transformed Mom into a monster with similar salivary yens. After the boarder's ignited in Mom's kitchen, he is reduced to a pile of ashes, but Clay feels that's too drastic a solution for Mom and locks her in her bedroom instead. Mom's a crafty creature though, and you know it's only a matter of time before she's sneaking off to skid row again in search of her next meal.

Mom has a pet dog, Winston, who is normal and loves Mom in spite of her idiosyncrasy All animal action is very simple..