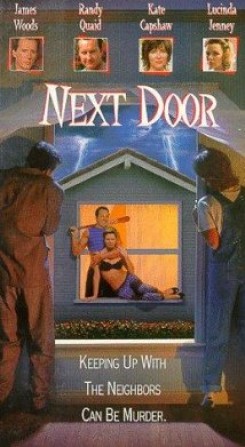 Next Door is the story of two families; Matt, Karen, their son Bucky and Lenny, Marcy, and their son Sparky. They have lived next door to each other for over a year and have not yet managed to bridge the gap between the working class and the intellectual class. Lenny is a gruff, hard working butcher who is obsessed with being a real man's man. Matt, on the other hand, is a college professor who is convinced that everything can be settled on a more intelligent level. As expected, things escalate into a neighbor to neighbor feud, with both neighbors trying to out-trick the other with a series of childish pranks. But these pranks lead us to an unexpected ending.

Both families own a dog, both of which are seen in various scenes, playing with the boys, lying on the bed or couch, being petted and eating. In one scene Lenny's dog comes over to Matt's house while Matt is painting the porch. The dog proceeds to walk through the wet paint and then traipse it back into Lenny's house, getting the red paint everywhere. For this scene, the dog followed his trainers verbal and hand commands to go onto the porch and then back into the house. Food was given as a reward. The "paint" used was actually a mixtue of adobe clay, dirt, and water, none of which would be harmful to the animal. That evening Mat calls Lenny to apologize and while he is on the phone he hears the screams of his son and runs outside to see that their dog is lying dead on the front lawn. For this scene the dog followed verbal commands from his trainer, who was just out of camera range, to "play dead".