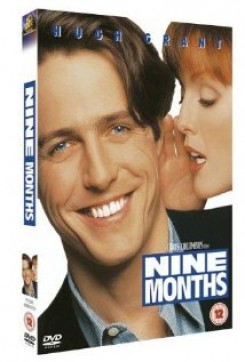 Nine Months is a romantic comedy revolving around Samuel and Rebecca, a young unwed yuppie couple, who must all of a sudden put their priorities in order. Samuel and Rebecca, both sporting very prosperous jobs, are living together and very much in love. Rebecca seems to want a little more from the relationship than Samuel is willing to give though. She wants to marry and have children. But Samuel likes things just the way they are and feels as though things would change if they wed. Although it is very unplanned, Rebecca becomes pregnant, and when she informs Samuel, he tries to take it well, but is quite nervous about the whole thing. Samuel is convinced by his playboy friend that Rebecca is trying to trap Samuel into marriage. He confronts Rebecca with this thought, and as to be expected, Rebecca is more than a little unhappy with Samuel's attitude, so when he does not make the second sonogram appointment, Rebecca decides to leave him. What she doesn't know is that he did arrive at the appointment, although late, and the doctor gave him the video of his unborn son. This changed his whole attitude about having a baby, but Rebecca refuses to see him. It is not until she almost loses the baby in the seventh month that Samuel is able to convince her that he loves the baby and her and that he wants to marry her.

Samuel has a cat whom he loves very much. When Samuel and Rebecca first visit the Gynecologist, they're seen by a wacky doctor who informs them that they must get rid of the cat because cats can transmit Toxoplasmosis to unborn babies. However, Samuel does not intend to get rid of the cat. Later, out by the car, Rebecca tells Samuel that he has to get rid of his 2-passenger sports car because there is no place for the baby and he must get rid of the cat because it is dangerous to have around the baby. According to Rebecca, a cat could suck the breath out of the baby and could scratch the baby's face. No cat was seen or used in either one of these scenes. In one scene when Samuel and Rebecca are separated, he is at a party feeling rather out of place. He is sitting in a corner petting a cat when a woman approaches him, takes the cat and tosses it aside so that she can get Samuel onto the dance floor. The cat, who had been conditioned for this scene, had been placed in the actor's lap by her trainer. The actress simply picked the cat up and tossed it back towards the trainer, who was just out of camera range. In another scene a close-up shot of a praying mantis is seen. This was stock footage which was dubbed in during post production. A dog is also in two scenes. Initially we see him with his family on the beach. Later when his family comes to visit Samuel and Rebecca, the dog briefly jumps up on their bed. He was responding to the signals of his trainer. While American Humane was totally opposed to the wrong messages given out about cats in the film, we rate only on how animals are treated during filming.