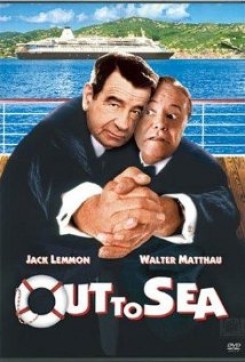 Out To Sea is a comedy about two men in their seventies, Charlie, an addicted gambler, and Herb, his lifelong friend still mourning the death of his late wife. After having all of his winnings confiscated by his bookie, Charlie pays Herb a visit and convinces him to go on a vacation cruise to Mexico. Unbeknownst to Herb, Charlie has hired them on as dance partners for the passengers, hoping that the two men might find a rich wife.

In the beginning of the film, Charlie is at the Santa Anita race track betting on the ponies. The horses are seen racing, or in their stalls, or being mounted by the Jockeys. Some horses are also seen in the background being walked. The scene was shot in cuts. Experienced wranglers rode the horses for the race sequence. At one point, everyone from the boat visits a Mexican village while a festival is taking place. Godwyn, the entertainment director on the ship, is seen being hoisted up on a bull while wearing a head piece that resembles a parrot. Unbeknownst to Godwyn, he has now become part of a ritual in the village where he must ride the bull through a ring of fire. After passing through the fire Godwyn's head piece catches fire and the bull takes off running up the hill. The scene was shot in cuts. A professional stuntman was riding the bull as it passed through the fire ring. The bull was first lead through the fire by wrangler # 1 and #2 and then the stuntman rode him B to C through the fire. The head piece was made out of straw. As a safety precaution, the bull's entire body was saturated with water. There were water and fire extinguishers readily available if needed. In case the ashes from the burning head piece were to fall, stuntmen were positioned on each side of the arch so the ashes would fall on them before reaching the bull. All rocks and debris were cleared from the path the bull would be running on. The bull was checked after each take by an American Humane Field Representative. The crew were warned to keep their distance so as not to spook the animals. Other animal action consists of the bull seen being lead into the village by two stuntmen. There are also some horses and riders seen riding along the road as the tourist bus passes by on its way to the village. The horses belonged to the director and she and four of her trainers rode the horses for this shot.