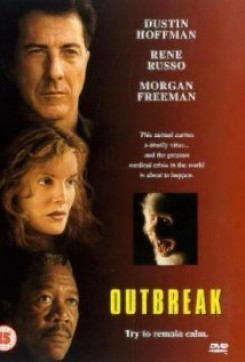 While in Zaire, Jim, one of the attendants, captures one of the monkeys by throwing a net over him. To accomplish this scene, the monkey was trained to be caught in the net. In fact, he was taught that the net was part of a game so had no fear of it. In Cedar Creek, Jim drives a forklift which moves the caged monkey. To accomplish this scene, the trainer positioned the cage on the forklift. As the actor drives the forklift, the trainer walks alongside the monkey just off camera, giving verbal commands. The monkey was then rewarded with food. In another scene, Jim drives the car with the monkey in the cage in the back seat. In reality, the car was on stage so was never really moving. The monkey's cage had been prepped for the scene by removing the bottom of the cage to give the monkey more space. The monkey, still in the back seat of the car spits on Jim. For this scene, the trainer put water in the monkey' mouth with a syringe and cued the monkey to spit water out. When Rudy takes the monkey out of his cage at the pet store the monkey scratches Rudy in the face which draws blood. To accomplish this scene, the trainer positioned the monkey with the actor. A makeup artist applied a non-toxic stage blood to Rudy's face and the monkey's hand. The trainer then gave a verbal cue to the monkey to raise his hand to the actor's face. The monkey did not actually scratch the actor. When the monkey in the pet store reacts to the fish tank crashing and is frightened by the noise, the trainer merely cued it to laugh which made the monkey appear to be frightened. Robbie goes to the pet store where she notices the other monkey in its cage near death. To accomplish this scene, the trainer put non-toxic ophthalmic ointment in the monkey's eyes to make them look red, then cued the monkey to stay. When Sam and Salt shoot the monkey with a tranquilizer gun, the monkey walks slowly back into the woods and lies down. This scene was filmed in cuts. We first see Salt aim and fire the gun. We never actually see the monkey get shot. Then we see the monkey walk slowly into the woods. For this scene, the trainer had tied a dart with a soft cord around the monkey's waist, placed the monkey on his mark and then cued him to stop and lie down. For the close-up shot, the trainer placed the monkey on the ground and cued him to stay. In order to get different camera angles and more takes, an animatronic monkey was used. The animatronic monkey was also used when Sam and Salt picked him up and put him in the helicopter. In an earlier scene, while Sam is bathing the dogs, he goes to answer the phone, leaving the dogs in the tub. The dogs jump out of the tub and shake off the water. To accomplish these scenes, the trainer first positioned the dogs in the tub, giving verbal and visual commands with food as their reward. Warm water was used for the bath. The dogs were kept warm during and between takes with heaters and were dried off well when finished with their baths. In another scene, while the dogs are in a taxi, they are barking to get out to Sam. One of them hangs his head out of the window of the taxi. For this scene, two trainers had positioned the dogs in the back seat of the car. One of the trainers sat in the back seat with the dogs while the other one called the dogs from behind to look back at Sam. Between takes, while the dogs were in the car, the air conditioner was kept on for their comfort. Additional animal action included various laboratory monkeys, apes or rabbits in cages. There were also several animals in cages in the background of the pet store including a monkey, parrots, hamsters, fish, rabbits, cats, rats and other birds. The trainers merely placed the animals in cages and then positioned the cages. When Rudy, the pet store owner, becomes sick with the virus and collapses over a bank of aquariums full of fish, plastic fish were used in place of the live ones.