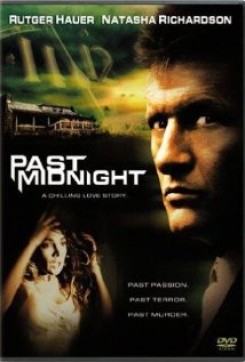 Past Midnight is a suspenseful whodunnit about a man released from prison after serving fifteen years for murdering his wife - a murder he may or may not have committed. Under the terms of his parole Ben Jordan is assigned to a small town and a social worker, Laura Mathews, who will try to find him work. During her interview with Ben, Laura becomes curious about the details of his past. His pregnant wife had been stabbed thirty six times by her murderer, much of which her murderer filmed. Laura has difficulty believing that Ben, a sensitive and intelligent man, could have performed such a deed. After some investigating of her own into the murder, Laura is convinced that Ben is innocent and becomes romantically involved with him. Laura becomes pregnant and shortly afterward begins receiving anonymous threats on her life. When Laura learns new information about his wife's murder Laura is no longer sure about Ben's innocence.

Although there are several scenes in which one of the characters is fishing, no fish are ever seen. The actor merely has his pole in the water or works with the rod and reel or other fishing gear. In a meat packing plant scene, several carcasses are hanging from hooks. This was filmed in an actual meat packing plant using several carcasses from the plant. A horse adds atmosphere to a scene which takes place in a barn. A bird that unexpectedly flies out of some brush increases the tension in the suspenseful final moments of the film.