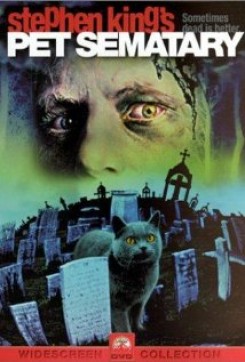 Based on the Stephen King novel, Pet Sematary is a scalp tingling horror tale of the supernatural. When Louis moves his wife, Rachel, and their young son and daughter into a quaint house in the New England countryside he is drawn to a path behind their house that leads to an old pet cemetery. His elderly neighbor, Judd, tells him that most of the pets buried there were killed on the highway that runs past their house. While his family is away Louis finds his sons, Gage, cat dead alongside the highway. Because Gage had been so devoted to his cat, Church, Judd leads Louis to an old Indian burial ground above the pet cemetery where Louis buries Church. After his family returns home Louis is preparing to tell Gage about Church when the cat walks in, seemingly normal, apart from some mud and a foul odor. Louis is plagued by nightmares in which a dead student, whose life he had attempted to save, appears. In the meantime, Church's personality has become more predatory as when he drops a dead rat into the tub while Louis is bathing or when Church attacks Louis. Judd tells the story of many years ago when he buried his pet dog and it returned. Judd then confesses that whatever is buried in the Indian burial ground above the pet cemetery will come back to life, but comes back as "something evil". While the family is on a picnic, Gage wanders onto the highway and is killed instantly by a speeding truck. The family is devestated with grief and after the funeral, Rachel and her daughter fly to Chicago to stay with her parents for awhile. Alone at home Louis blames himself for Gage's death and is consumed with the thought of digging up Gage's body and burying it in the special ground above the pet cemetery. When Rachel suspects what Louis has in mind, what follows is a suspenseful race with time leading to a bloody and violent climax.

The dead cat found alongside the highway was fake. A dead rat dropped into the bath water was fake. When the cat is killed a second time at the climax, the needle is rigged to look as if it is sticking into him, but it is not. The cat was sedated by a veterinarian. A representative of American Humane was present and the cat made a full recovery. Both the cat and dog are made to appear bloody at times. Harmless make-up was used to look like blood.