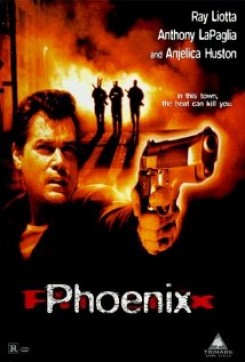 Phoenix is a film about Harry, a police officer with a gambling problem and his three cop friends. To help Harry pay off a gambling debt, the group turns to robbery and murder which eventually leads to their demise.

In the beginning of the film, Harry is in an abandoned building when he sees a cockroach run A to B across the floor. With his foot, he moves a container on the floor which reveals several more cockroaches. He picks two of them up and places them on the floor, watching them run from A to B. He then puts one in his pocket and leaves. Much later, Harry pulls his car over to the side of the road and opens his door, placing the cockroach on the ground. The wrangler placed the cockroaches on their mark and retrieved them at completion of the shot. For the shot of the actor placing one in his pocket, a real cockroach was used. The actor was very gentle when handling the insect.