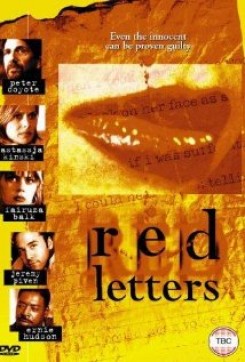 Red Letters is a comic mystery about a college professor, Dennis Burke, whose areas of expertise include the writings of Nathaniel Hawthorne and the beautiful coeds in his classes. After a heartbroken coed charges him with sexual harassment, he moves to another college to make a new start. Alone and depressed, he begins a correspondence with a beautiful prison inmate named Lydia, befriends a fellow professor, Thurston, who is a computer hacker and fends off the aggressive sexual advances of the Dean's daughter, Gretchen. Dennis finds out that he is the magnet for trouble in everyone's life.

When Dennis attempts to help Thurston get out of an affair that has led to a downward career spiral, he drives to a desert trailer park on a hunch. There in the yard is a dog that barks at the car and at Dennis. For this scene, the trainer was off camera giving the dog hand signals to trigger the barking. In another scene where Dennis and Thurston break into the home of a suspect who holds a key to Lydia's guilt or innocence, they are confronted with the man's pets-reptiles. On the balcony is a child's swimming pool containing a baby alligator. Inside the house are numerous aquariums containing a variety of snakes. There is even a large tree branch that acts as a perch for a large python. During the volatile inquisition, the professors knock over an aquarium containing hundreds of small snakes. The snakes fall out and onto the bed and floor. Dennis then grabs a larger black snake that is supposedly poisonous and threatens the owner with this venomous weapon. For this scene, trainers placed the three-foot alligator into the pool. When it jumped out of the pool, it was on a loose leash so it could not leave the balcony area. Live and fake snakes were used as set dressing that included about fifty small ribbon snakes, a python and a large black racer snake. When the aquarium was knocked over, the snakes in it were the fake ones. Trainers dropped live snakes onto the actor from off camera. The set was enclosed so that the live snakes could be collected between each take. Trainers coached the actor to handle the racer snake when it was used as a threat. ADOPTION NOTE: The small ribbon snakes were adopted after filming by one of the crew. She reports that they appear to be quite happy in a large terrarium in her living room. Two other animals are seen in the film. In one scene, Dennis' elderly neighbor is seen walking his little Chihuahua. When Dennis picks the dog up, it licks his face lovingly. At the end of the film, a cat is adopted from a shelter to help Dennis in his new life. The cat is seen being snuggled by the actors and walking on the bed.