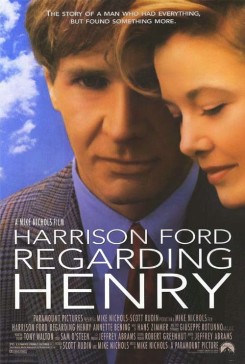 Regarding Henry is a warm human drama about a slick, successful and somewhat unethical New York attorney who is reborn after an injury that nearly takes his life. Henry is at the peak of his success with a beautiful wife, daughter, wealth and friends. After a party one night in his luxurious apartment, Henry goes out for a pack of cigarettes at a neighborhood store. He interrupts a robbery and is shot in the head, sustaining serious brain injury. In that one fateful moment his life is changed. He can't walk, speak and his memory is so effected that he doesn't even remember his wife and daughter. In his long rehabilitation that follows, he learns some unsavory truths about his former life but discovers what is really valuable in his new life.

On his first time out alone after he returns home, Henry spots a puppy in a pet shop and brings him home to his daughter who names him Buddy. Buddy becomes very much a member of the new family and is with them in several scenes including the very moving ending. Several dogs were used to play the one. For the most part there was no special staging for the dog and he was allowed to do what was natural.