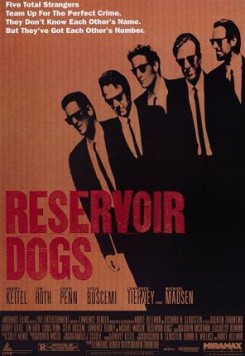 Reservoir Dogs is a very violent story of how six men plan to rob a jewelry store. All of their plans backfire and the robbery turns into a blood bath, as one of the men is actually an undercover cop that has tipped off the police. When the hoods, some wounded, flee the scene they begin to realize that they have been set up and there is a "rat" amongst them. Now the remaining men run to their warehouse hide-away to re-group to figure out which of the men is indeed the snitch. The plot is disjointed and the film is filled with foul language and extreme violence. In one of the scenes a gangster kidnaps a policeman and terrorizes him, including slicing off his ear and setting him on fire.

Animal action is limited to one scene in which one of the thugs enters a public restroom and meets up with three policemen and their dog who barks at the man.