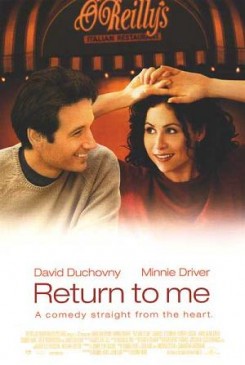 When Bob Rueland's young wife, Elizabeth dies, her heart is donated to a waiting recipient. Later, Bob meets another woman and falls in love with her. He realizes that destiny has taken a hand in his life when he discovers that his new love was the recipient of his late wife's heart.

Elizabeth works as a researcher at a zoo before her untimely death. The zoo scenes were filmed at the Lincoln Park Zoo in Chicago IL and the behaviorists who work with the animals daily were able to get them to do what they do as routine for the camera. Food rewards were motivation and the gorilla, Sydney, has been trained to use sign language.

Being an animal person, Elizabeth and her husband Bob also have a pet dog. Mel, the dog, and Sydney, along with the humans in their lives, are examples of the joys of the human/animal bond.

Movies have given us amazing animatronic gorillas such as Mighty Joe Young and the communities that taught Anthony Hopkins about animal/human instinct and Sigourney Weaver about life in the jungle mist. However, in Return to Me, we see a real gorilla reaching out to gently touch a real human being. The actual caretakers at the Lincoln Park Zoo have taught the giant ape to reach out and touch a red dot that is generated by a lazer beam, no matter where it points. Actors were actually able to learn the same behavior for a very touching scene in the movie.

Snacks that are close to a gorilla's heart.

The Heart Association may not have french fries on the list of approved foods for heart patients, but for Sydney they are a very humane treat. He also has fruit and bananas on the menu for balance.