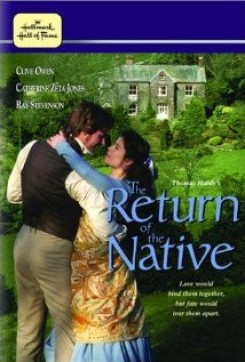 Return of the Native, The

Our story takes place in Egdon, Heath, England in 1842. A young woman, Tomasin, is engaged to marry a man named Daman, much to her Aunt's dismay. Although Daman professes his undying love for Tomasin, he will marry her for her money. However, Daman has put Tomasin off with every excuse possible, while awaiting for his true love, Eustacia, to consent to marrying him so they can run away together. Eustacia, unwilling to be second best, awaits the arrival of Tomasin's cousin, Clym, who has been working in Paris. Eustacia refuses to let Daman go, until her future is secure. And so it happens that one foggy evening, as Clym goes for a walk, there stands Eustacia next to a white horse looking so incredibly beautiful, he thinks he as seen a vision. As it turns out, Adman and Tomasin eventually marry as do Clym and Eustacia, without his mother's blessing. It seems that jealousies have led the townspeople to believe that Eustacia is a beautiful but evil witch whom they fear.

Through the years, the couples in our story become miserable. Clym goes blind and becomes a hermit, not going or taking Eustacia anywhere. Clym ultimately leaves Eustacia because he accuses her of being responsible for his mother's death. Because Eustacia feels that she has lost Clym forever, and Daman has never stopped loving her, they run off together, hoping to go to Paris. As they are leaving, a thunder and lightning storm strikes and as Clym runs after her, Eustacia is struck by lightning and thrown into a rapidly moving river. Daman jumps in to save her and they both drown. In the end, Tomasina marries Diggery, and Clym, although blind, becomes a teacher, but not before feeling Eustacia's ghostly presence, professing her love to him always.

Animal action is mild. In two different scenes we see a white horse standing next to Eustacia, as in a vision. In the background, we see horses and sheep grazing. Throughout the film, we also see horses being ridden or pulling buggies.