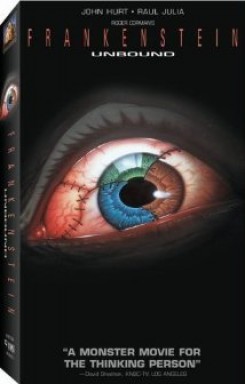 Dr. Joe Buchanon is a researcher experimenting in time travel. He finds himself transplanted from the 21st century to a 19th century countryside in Switzerland. At a roadside inn, he meets a Dr. Frankenstein and secretly follows him home where he learns the doctor has already created the monster that would become famous. Meanwhile, a young girl is unjustly accused of a murder committed by the monster, but despite Joe's efforts to save her, she is hung. At the trial he meets Mary Shelley, who is mystified when Joe tells her he knows of the novel she is secretly writing about a man-made monster. The brutal murders continue and Joe is unable to convince Dr. Frankenstein that he must destroy the creature that he has created.

In one scene, three bloodied sheep are found on a hillside where they supposedly were bludgeoned by the monster. The sheep were not harmed, but were covered with non-toxic stage blood and did a lay-down. Horse-drawn carriages are used in several of the 19th century scenes. A horse is also seen when a surrealistic man on horseback appears out of a storm cloud. Animals are primarily atmosphere in a marketplace. When two German Shepherds threaten Joe, he pokes a stick at them and they run away. There was no contact between the stick and the dogs and they merely responded to their trainer's call. Frankenstein Unbound was filmed on location in Europe and no American Humane representative was present. However, after discussions with the production company regarding animal action, American Humane is rating Frankenstein Unbound "Acceptable".