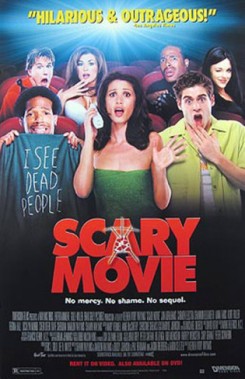 Scary Movie is a tongue-in-cheek horror flick satire. It primarily mocks the most recent crop of slasher films, including Scream and I Know What You Did Last Summer.

In one scene, a cat runs from inside the garage and out the door. A few seconds later, a horse follows. At another point in the film, a broken coffee mug is shown on the ground with a goldfish flapping on the ground next to it.

Later, bees buzz around a kid who stands up in the sunroo f of a car. Also, birds suddenly appear from beneath a young woman’s undergarments.

Unfortunately, AHA did not monitor this production and was unable to obtain information on how the animal action was achieved."