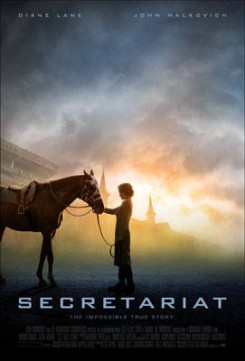 Penny Chenery Tweedy and colleagues guide her long-shot but precocious stallion to set, in 1973, the unbeaten record for winning the Triple Crown.

"Before filming, all grounds were inspected for hazards and sets were closed and secured. Cast and crew members were introduced to the animals and instructed on their proper handling.
Throughout the film, horses are seen at various racetracks performing such action as running or racing around the track, being groomed and walking in the training area and the paddocks, where horses are prepared and paraded. This action was filmed at actual racetracks, which were closed to the public during filming. Professional jockeys and groomers, including Secretariat’s jockey, played themselves while trainers stood off-camera. The horses were well-trained and accustomed to performing the mild background action, most of which involved doing whatever came naturally. They were also accustomed to being bathed, sponged with soap and sprayed clean with water, and the characters who bathe the horses on-screen were costumed trainers except for Secretariat’s groomer Eddie (Nelsan Ellis), who was extremely well-rehearsed for the grooming scenes.
For shots in which horses raced, several camera angles were used, along with cameras strategically mounted onto horses’ saddles or gear and secured in the dirt near the starting gate. The horses did not race the entire length of the track all at once. Instead, footage was edited together, and slow motion was used to make the horseracing appear more dramatic.
The experienced racehorses were accustomed to fast-paced racing action. Several of these horses were also trained to rear and “prance” or “pull back,” as if startled or agitated. For shots in which horses are seen milling about the fenced corral at the ranch, the horses were familiar with each other and allowed to roam at liberty. For shots in which the horses are in stables, whether standing, being groomed or being fed, they were accustomed to this mild action.
For the scene in which Secretariat is examined by a veterinarian, including having its teeth and gums wiped, the actor playing the vet was well-rehearsed on how to handle the horse and rub its gums gently. The horse was unfazed.
For the scene in which Secretariat appears to urinate near a man’s feet, the urine was added in digitally.
The scene in which Secretariat is born was an actual birth filmed “documentary style,” without any manipulation or interference from the cast or crew, with a very experienced veterinarian guiding a healthy, successful birth. This took place at a birthing ranch at which several pregnant mares lived. All horses at this special ranch were monitored 24 hours a day. For the filming, a camera was set up just outside the stable and a minimal number of crew members kept quiet and stood a safe distance from the sterilized stable. The camera rolled throughout the entire birth, although the film only shows the foal after it was already born. Immediately after the birth, the horse and foal were attended to, and moments later, the foal got up on its own and began walking, just as newborn horses naturally do within minutes of birth. The scene was edited to make it appear as if the foal’s first steps happened mere seconds after birth. The scene in which the foal frolics outside with its mother was filmed well after the birth, when the young horse was comfortable walking on its own.