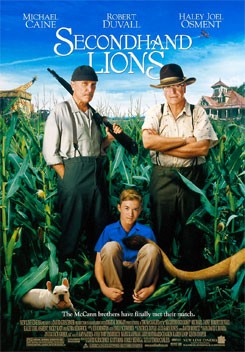 When young Walter (Haley Joel Osment) finds himself alone for a summer with his eccentric, millionaire uncles Garth and Hub (Michael Caine and Robert Duvall), he learns that friends are found in the places you least expect.

A canine crew — including one rather large pig, several intense horse scenes, and a few memorable moments with a lion, are featured in this film. While American Humane (AH) did monitor most of the dog and lion sequences, scheduling changes and funding restrictions prevented AH from monitoring the horse action and several other animal scenes. As a result, AH will not issue a "No Animal was Harmed™" end credit disclaimer for the film. AH has, however, spoken with the trainers extensively regarding how most of the missed action was achieved, and we believe that our Guidelines for the Safe Use of Animals in Filmed Media were followed. AH is rating this film Believed Acceptable.

As Walter and his mom, Mae, drive up to his uncles' humble country abode, several dogs run over to their car, barking excitedly and jumping up onto the doors. One small dog grabs Walter's pant leg and pulls it with his mouth. Adding to the chaos is a huge pig, who saunters over to the crowd to greet the new arrivals. The sound of gunfire in the distance prompts the animals to disperse. A motley crew of canine stars played Garth and Hub's crew: Bloodhounds Baron and Rufus; French Bulldogs Linus and Dancer; terrier mixes Nikki, Rosa, and Rusty; and Dachshund mixes Tyler and Chloe. Some of the pups were used as backups for the main dogs, when they needed a "method" moment or just a potty break. The role of the pig was shared by Norton, Bob, Russell, and Cornelius. The dogs were cued to the run to the actor and one was trained to grab the actor's pants leg, which had a small chew toy sewn on the inside of the leg. All were rewarded with treats. The gunfire was a sound effect added in post production; the animals were cued by their trainers to run away.

The pig approaches Walter as he sits on the porch. The grunty pig sniffs out the scared boy. A trainer released the pig to go to the actor, who rewarded him with treat.

The dogs enjoy lounging on the house porch. Off-camera trainers cued the dogs to "stay."

The dogs line up on the dock at night to watch Hub try to catch a fish using a toilet plunger. Walter sits with the pups, equally bewildered. The boy wakes up the next morning to find himself still on the dock, with all of the dogs lined up next to him sleeping soundly. Walter gets up and they all run back to the house together. The dogs were each cued by their own trainer to sit and stay.

The dogs help Garth and Hub with the gardening. The dogs were shown to their marks and naturally followed the actors around the garden.

The dogs watch the guys skeet shooting in the back yard. Trainers placed the dogs on their marks and cued them to "stay."

The dogs return to the dock at night to sit near a campfire and listen to Garth relay the story of Hub's long lost love. The dogs were cued to sit and stay.

The dogs and pig help Walter check the mail. The dogs were cued to the follow the actor by off-camera trainers while the pig was encouraged to follow with the help of a clicker.

Walter waits on the porch with the dogs for his mother, Mae, to pick him up. One of the dogs growls at Mae as she walks up the porch steps, and she warns him to stop. A trainer stood off-camera and cued the dog to growl.

The dogs chase Mae's car down the driveway as she drives off with Walter. Trainers cued the dogs to chase after the slow moving car.

The dogs walk with Walter back up the driveway to the house. Trainers cued the dog to follow the actor.

A giraffe stands in a transport truck labeled "ACME Animal Movers." The leggy animal impatiently groans as it waits for the men to unload a large crate, which contains a lion. The lion was not actually inside of the crate. AH did not monitor the sequence with the giraffe.

Garth and Hub stand in front of the lion's crate as it is opened, poised to shoot the animal while Walter pleads with them to stop. The crate finally opens and instead of the vicious animal they expect to encounter, a tame and relaxed lion lays inside of the crate and looks out at the shocked men in front of him. Garth and Hub reluctantly put down their guns, and Walter decides to keep the big cat as a pet. Walter moves up closer to the lion, which he has named Jasmine, and talks to her from outside the crate. Torey the lion played Walter's new friend Jasmine. Most of Torey's scenes were shot separately from the actors, and a trainer usually stood in for the actor when possible. Trainers cued the relaxed lion to "stay" while the camera rolled.

Later, Walter's young cousins break open the wood slats of Jasmine's crate. The lion growls at the kids and runs out of the crate and into the nearby cornfield. The lion was not actually inside of the crate when the kids were breaking it open. Trainers worked with the lion separately to get her to growl and run out of the crate.

Walter tries to find Jasmine in the cornfield. Suddenly, the lion runs out of the tall grass and jumps onto Walter, knocking him to the ground. Walter and Jasmine affectionately wrestle with each other for a few moments and then Walter gets on her back and they run back into the cornfield to continue playing. A trainer doubled for the actor in this scene. Torey was trained since she was a kitten to play "attack," which she happily performed for this scene. Another trainer hid in the cornfields and called her to "come," and then she was handsomely rewarded with a treat.

Walter's mother brings her new boyfriend to meet him. Her boyfriend is mean to Walter, prompting Jasmine to spring out of the cornfields and jump on him. The lion knocks him over, but suddenly turns still. Apparently, the lion has had a fatal heart attack. Walter holds the dead animal in his lap, upset over the loss of his friend. Torey was again cued to "attack" or play with the trainer, who doubled for another actor in this scene. A fake stuffy lion was used for the death scene.

As young men, Garth and Hub had many exotic adventures while serving in the foreign legion, some of which Garth shares with his nephew, Walter. The adventures are recreated in flashback sequences, and include many intense battle and racing scenes with horses. The intense horse action includes: horses running among cannon fire, horse falls, a fast-paced horse race on the beach between Hub and his lady love, Jasmine, and sword and gun battles on horseback.

While funding restrictions coupled with scheduling changes due to unpredictable weather prevented American Humane (AH) from physically monitoring these intense scenes, AH spoke extensively with the horse wrangler during and after production to determine the safety of the animals. After screening the film and obtaining reports from the trainer regarding the horse action, AH believes that the animals were treated humanely and were not asked to perform any action deemed too dangerous. Per the trainer, the horse falls were achieved with trained falling horses that were cued to go down on cue, and the gun and cannon fire scenes were achieved per AH Guidelines, using quarter loads of gun powder for the safety of the animals. The beach race was carefully choreographed and professional wranglers rode the horses in the scene.

Garth and Hub shoot at fish swimming in the lake, but do not catch any.

Walter, Garth, and Hub all go fishing in a small boat. Hub impatiently shoots at the fish, and one fish pops up out of the water and Walter catches it in a net. There were no fish in the water when the men were shooting; insert shots of the fish were added during the editing process. AH did not witness a fish being caught in a net, but was on set when several catfish were to be filmed swimming around a man-made pond.

Birds fly over the boat docking during a flashback scene. The birds were computer-generated.

A caravan of camels is lined up near the Arabian desert outpost. AH did not monitor the camels.