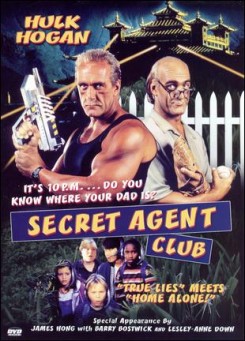 The Secret Agent Club is a film about Ray Chase, a secret agent for Shadow, a covert government agency. Chase successfully steals a futuristic handgun from the evil clutches of Eve Ellivon, the enemy. Chase and his son, Jeremy, are leaving the toy store that Chase supposedly works at, when Eve's thugs catch up to him. Unfortunately, Chase did not have time to turn the gun over to the agency. Jeremy escapes while Chase is captured, but not before he hides the gun in a safe place. Jeremy was not aware that his dad was a secret agent, so he is unsure of whom he can trust. Therefore, Jeremy and his friends decide to rescue Chase themselves. He and his friends proceed to the toy store and pick up some very amusing, but affective weapons. The youngsters then descend on Eve and her thugs, rescuing Chase.

In the beginning scene, a ferret is seen eating in a wooded area. When the ferret hears the rumble of an approaching helicopter, he turns and scurries out of sight. For this scene, the trainer placed some food on the ground and then placed the ferret on his mark. When the ferret turns and walks out of camera range, the trainer merely used a buzzer to cue him to his next mark. Other animal action consists of a dog seen being walked on a leash as Chase passes by in his car.