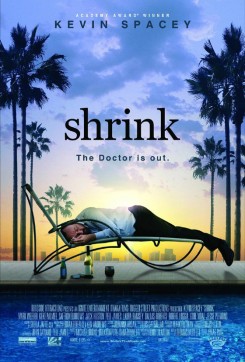 Unable to cope with a recent personal tragedy, LA's top celebrity shrink turns into a pothead with no concern for his appearance and a creeping sense of his inability to help his patients.

Carrying an UNAUTHORIZED DISCLAIMER
An American Humane Association Certified Animal Safety Representative™ did not monitor the animal action in Shrink. Although the film carries the ""No animals were harmed""® language at the end, American Humane’s Film & TV Unit did not issue an official disclaimer to the film. American Humane has contacted the production and asked them to remove the unauthorized disclaimer.
The animal action in the film is some mild pig and dog action, a scene with a dog on Henry’s (Kevin Spacey) lap while he drives a car and smokes a joint, and a scene in which a dog lies dead on the floor.