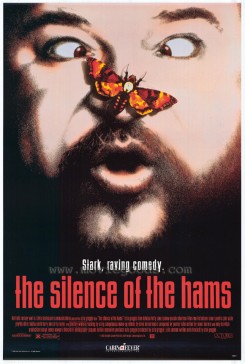 Silence of the Hams

The film opens with a parody of famous film studios using a shot of a howling wolf encircled by a logo which reads "30th Century Wolf." This is followed by some stock footage of Piazza San Marco in Venice, Italy filled with pigeons. A voice over tells us that it is Los Angeles. Stock footage was used for the shots of the wolf and pigeons. Fledgling F.B.I. agent, Joe Dee Foster, gets his first assignment which is looking for a psycho killer. As he is being briefed in Chief Putrid's office, Putrid goes to the water cooler where two goldfish are swimming around. Joe begins his investigation at the Hollywood Nut House where he must interview the famous murderer, Dr. Animal Cannibal Pizza. Dr. Animal's modus operandi is to put whole body parts of his victims on a pizza. We are shown a series of Polaroid's first of a foot coming out of a pizza, then a pizza with a leg emerging, one with a buttocks, and finally one with a whole head as a topping. Dr. Animal is kept in the Unbelievably Bad Maniacs Wing and supposedly has psychic powers. Joe wants Dr. Animal to use these powers to identify the killer he seeks. During the interview, Dr. Animal blows his nose and the handkerchief turns into a fluttering dove. This is meant to illustrate Dr. Animal's powers. In reality it was a simple magic trick. After leaving Dr. Animal with no more clues than when he began, Joe is seen back in his apartment where he is dressing after a tryst with his girlfriend, Jane. In this scene we meet his pet cat. As Joe and Jane argue about whether they can afford to get married or not, the cat jumps up onto the desk under Joe's nose. He picks up the cat and tosses it. The cat lands on the dresser right next to a fan which is turned on. He gets his tail caught in the fan. We see a close up of the back end of the cat and the fur flying. Then we see the cat land on the floor escaping the fan. This scene was shot in cuts and utilized a real and a fake cat. The trainer used voice and buzzer commands to get the real cat to jump onto the desk. The same technique was used to get the cat on and off the dresser. When the cat is thrown, it is a fake cat that the actor is tossing off camera. When we see the fur flying, it is fake fur blowing in the air and a fake cat seen only from the mid-body area back to the fan. The head of the cat is never seen so that the prop cat could be held against the blades of the fan. While all of this is taking place, Joe and Jane keep talking and act oblivious to the cat's dilema. Jane steals $400,000 from her boss and escapes out of town hoping Joe will marry her now that money is of no object. Her first night on the run is spent sleeping in her car. The following morning, we see she is parked at the side of the road with a cow standing in front of the car. We then hear the motorcycle engine of a highway patrolman. For this scene, the cow was placed by a trainer in front of the parked car and a wrangler was off camera, behind the cow, steadying it. Neither the car nor the animal moved. Later, as Jane drives down the road, she passes a camel and rider on the side of the road. The camel remains stationary while the rider watches her drive by. The rider was actually the camel wrangler. Jane finally arrives at the Cemetery Motel, owned by Antonio Motel, which resembles the famed location from the movie Psycho, complete with the old mansion on the hill behind it. Antonio, dressed as a woman, kills Jane in the shower. Detective Balsam, hired by Jane's sister, Lilly, tracks Jane to the motel and he too is killed by Antonio. Joe goes back to Dr. Animal for more information. Joe also goes to seek the help of an old friend named The Ranger. The Ranger is an old eccentric crime solver, now retired. Eventually, everyone ends up at the Cemetery Motel's mansion, replete with Antonio's mom in the basement and the arrival of every known character in the film, including the highway patrolman. We find that neither Jane nor Detective Balsam were ever murdered. Thus begins the unmasking of a multitude of disguised identities, leading to the zany conclusion of the story.