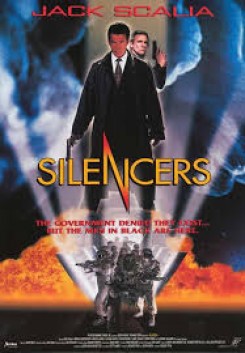 Silencers is an action Sci-Fi thriller about six aliens who land on earth in 1966. They make a deal with our military that they will show them how to access communications with other Aliens in outer-space via a port-hole in exchange for the Aliens being permitted free reign on Earth. During the Aliens presence, over the next twenty-six years, they secretly clone government officials. Their goal is to transport an Army from their own planet through the communication port-hole and ultimately rule earth. In 1992, when the port-hole is activated, Condor, a law enforcement Alien sent to stop them from taking over Earth, comes through instead of the Evil Alien's military forces. Special FBI Agent, Chuck Rafferty, learns of their plot and joins forces with Condor in defeating the Evil Aliens from achieving their goal.

In the beginning scene, we see a dog sitting on the front porch of a farmhouse while a cow, a horse and goats are seen in their corrals. The wind starts to pick up as a spaceship is seen hovering over the cow. It surrounds the cow with a bright light and the animal is lifted into the ship. To accomplish this, a helicopter hovered about thirty feet above the cow shining a light on the area. The portion of the scene where the cow is seen being lifted into the air was accomplished through special effects.