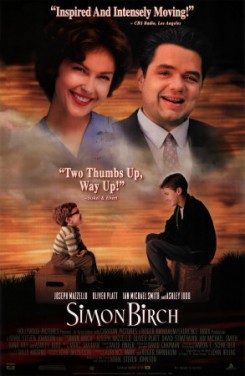 Simon Birch is a film about the strong bond of friendship between two young boys, Ben and Simon.

Toward the end of the film, Ben is sent to camp during Christmas vacation. While driving back to town the bus driver swerves to miss a deer in the road. When the bus swerves the car behind it also swerves just missing the deer. This scene was shot in cuts. The deer was placed on its mark to establish it in the road and was then removed when they filmed the vehicles approaching. Experienced stunt drivers were used and at no time during filming was the deer in danger or under stress. Due to filming techniques, especially camera angles, the deer looks much closer to the vehicles than it actually was. Two other scenes involve a deer. In one scene the deer is seen grazing in a field and in another it is standing on some rocks at a quarry, turns and walks away. Other animal action consists of a dog licking Simon in the face and being walked A to B on a leash. There is also a scene where a squirrel runs A to B across a fence rail.