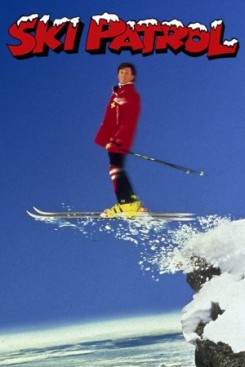 This is a teenage movies. It's very much like Animal House done in the snow! A greedy real estate broker plans to cause a quiet winter resort, Snowy Peaks, to lose its safety license so he can buy it and make millions by developing it into a commercial vacation spot.

During an anniversary party, a cake is wheeled in and when the box is opened, mice are scampering around on top of the cake. The guests flee to avoid them, and one lady jumps on a chair which teeters and she falls into the cake. A fake mouse is used on the cake when the guest falls into it. Scene with guests in flight and mice scampering are done separately to avoid injury to the mice. Dumpster, a bulldog drinks from a beer mug. (It's not really beer) The sneezing and belches are accomplished through sound effects. Dumpster is shown throughout the picture as the ski patrol's mascot. In reality he is only off the ground by three feet and climbed down a ramp with a rope in his mouth. The camera angle makes it appear as a steep slope. The dog and man were hoisted back up with both wearing harnesses. They were no more than three feet off the ground at any time. Through camera angles, it appears to be a cliff.