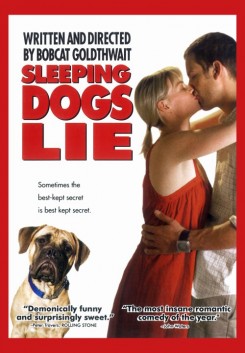 A recently engaged woman's life is thrown into turmoil after confessing to her fiancé that she once experimented with bestiality.

In one scene, Amy’s dog, Steve, lies on the floor near her as she sits reading on the couch. A three-year-old bull mastiff named Hooch played Amy’s beloved dog. One trainer crouched down just off camera and was able to pet the dog during the filming to make Steve appear happy. Hamilton kept treats in her pockets and a trainer used hand signals and verbal cues to get the dog to follow the actress to another room.
Two sequences with dogs take place at a park. In the first, John has Steve on a leash and Steve jumps up on Amy when she approaches. Background dogs in the park were with their owners and handlers as they played naturally, and all had been introduced to each other before filming began to ensure compatibility. An off-camera trainer cued Hooch to jump up on the actress and give her a sniff. In another scene, Ed (Colby French) walks his small dog, Cowboy, to a bench in the park. The trainer handed the dog’s leash to the actor just before filming began. During another scene at the park, some dogs are crated and one is petted by a small group of people. Trainers and owners got the dogs into position and the extras in this scene were instructed on the handling of the animals before filming began.
Hamilton had baby food smeared on her cheek to encourage Hooch’s kisses in one scene. When the mastiff accompanied Amy and John in the car, a trainer hid inside with the dog to make sure that all went well. Hooch had been very well prepared for car rides and was comfortable and secure at all times.