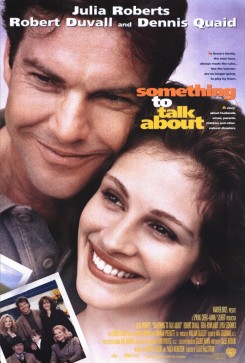 Something to Talk About

Something To Talk About is a film about Grace, a young southern woman, and how finding out about her husband's infidelity opens her eyes to life. Grace was brought up in the old southern tradition that a woman should never cause a scandal or bring embarrassment to her husband or family. Therefore, when Grace, wearing night gown and boots, confronts Eddie, her husband, at eleven o'clock at night in the middle of the street about his affair, it causes some family unrest. After this confrontation, Grace decides she needs a separation in order to figure out her next move. She takes Caroline, her daughter, and goes to her parents in the country to stay with her sister in the guest house. While there, she takes a good long look at her life and tries to figure out where she lost control. She always wanted to become a large animal veterinarian and only had one year left when she married Eddie, her husband. Her life became that of wife, mother, and stable manager at King Farms, her father's stables. She joined all the appropriate organizations, but now realizes that she is tired of living her life for everyone else. She is trying to get the horses and riders ready for the Grand Prix horse competition that the stables have entered. With her sister, Emma Rae's help, she succeeds in spite of her father's constant reminder about her duties as a wife. After the Grand Prix, there is a party at her parent's home where she and Eddie dance. Later he climbs through her bedroom window, as he did when they were dating, to talk about their getting back together. Grace explains to him that she has to get her life back before she can think about one with someone else. They agree to date and see if they can find that spark that brought them together in the first place, as they are both still very much in love with each other.

In the scenes at the Grand Prix competition, all horse jumps were accomplished by professional Grand Prix riders except for the close ups with the actors. An American Humane field representative was present and checked the course everyday prior to shooting. All background scenes involving horses were ridden by professional riders standing in as extras. In one scene, Grace and Emma Rae are watching television and Hoover, Me Rae's dog, is sitting between the two of them on the floor. In another scene Emma Rae and Grace are sitting on the front porch and Emma goes in the house and the dog follows. The dog was merely following the voice and hand commands of his trainer. Horses are seen throughout various scenes in the film as background, in their stalls, the practice ring, being rubbed down, etc.