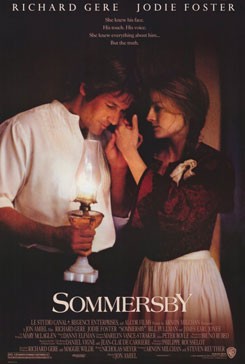 Sommersby is the bitter-sweet story of a man and his dream of a better life. Jack Sommersby returns home from the war after being held prisoner by the enemy for six years. Little has changed, except for Jack. In fact, Jack has changed quite a bit. The townspeople, and even his wife, Laurel, contribute his differences to being away so long and under such horrible circumstances. But the old Jack was a vicious, uncaring man who loved only his father and his dog. The Jack who has returned is the complete opposite. He's a loving husband, devoted father and a model citizen. Or is he really Jack? After the war, poverty is in full swing and the land is poor, which means no more cotton can be grown. Jack arranges to sell plots of his land to any buyer willing to part with all the worldly goods they may have left in order to work the land to grow and sell tobacco. All of the townspeople purchase small areas of the land and work together to make the crop a success. One day Jack runs across a gentleman that insists he knows Jack, but not as Jack. He knows him as a no good, low down thief and murderer. The town is in an uproar. They refuse to believe that this man that has, in essence, saved their town and lives could be anyone but Jack. Jack is taken into custody and must await his trial for murder. We watch as the heart-sick Laurel must now try and prove that this man is indeed not Jack, but an imposter. Or is he? If he is, he will be hanged for murder. If he is not, the townspeople will loose their land and crops.

Animal action is continuous in this period piece with horses, mules and donkeys seen throughout being ridden, pulling wagons and plows, and as atmosphere. In an opening scene, as Jack is returning home, his dog, Jethro, is lying on the porch. As Jack approaches, the dog begins to snarl and growl at Jack. Jack bends down and pets the dog on the head, quieting him. To achieve this, the dog followed hand and voice commands from his trainer, who was out of camera range. In a later scene, Jack's son finds Jethro lying dead beside the house, supposedly poisoned. The dog, wrapped in a cloth, is then buried by Laurel, the hired hand, Oren, and the boy. To accomplish this, the dog had been given just enough anesthesia by a vet for him to appear dead during the scene. The dog was not actually in the grave when the dirt was placed in it. In a scene as some of the farmers are tending the tobacco plants, one of the men discovers a horn worm, then another, until they discover that they are infested with the plant eating worms. The men all get buckets and proceed to pull the worms off of the plants, placing them in the buckets. One of the men takes a bucket of worms up to the house and dumps them on the porch, showing Jack. These were worms purchased from a local insect ranch and raised from babies by the props department of the production company. When the actors removed the worms from the plants they did not injure them, they merely placed them in the buckets. The worms that were poured out of the bucket were picked up and returned to the field after this scene was completed. The worms were allowed to continue to live in the tobacco field, which the production company also raised, during production and after the filming of this movie was completed. Later, as the men are still removing the worms by hand, Oren comes over with pales full of insecticide and instructs them in the use of the chemical. He places some in a shallow ditch around one of the plants. This was not actually insecticide, but ordinary water. In another scene the Ku Klux Klan ride to Jack's home and set a cross on fire in his front yard, as Jack has permitted black men to purchase some of his land for their own. Jack runs out of his house to investigate and the men in their white sheets start firing into the night sky. These were actually 1/4 loads. Jack runs up to one of the riders and attempts to relieve him of his gun, causing the horse to rear. The gun goes off, just missing Jack, and the men whirl around and ride off into the night. A trained rearing horse was used in this scene and the horse merely reared on cue. A puppy is seen being picked up and petted by Jack's son and playing in the background with the boy in two other scenes. Chickens are also seen as atmosphere in and around the farm. American Humane was not on the set for all of the animal action in this film, as shooting dates were changed. However, after conferring with the on set veterinarian, the trainers and the production company, we are rating Sommersby "Believed Acceptable".