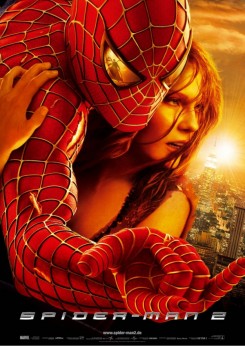 In Spider-Man 2, Tobey Maguire returns as the mild-mannered Peter Parker and finds himself struggling to maintain the delicate balance of his dual life as college student/superhuman crime fighter. Though Parker wants to have a normal life with Mary Jane, and shed the obligations that being Spider-Man implies, this proves impossible when scientist Otto Octavius (Molina) is reincarnated as the maniacal and multi-tentacled "Doc Ock." The famous nerd-turned-hero must answer his calling and confront this new nemesis when he threatens New York City and the people Spider-Man loves most.

In an apartment building hallway, Spider-Man encounters a man with a basset hound waiting for the elevator.

They ride down together and make small talk about Spidey's itchy "costume", although the dog is not actually seen at this point. To accomplish this simple scene a handler placed the pooch, named Madeline, on mark in a sitting position while the actor stood next to her. After handing the actor Madeline's leash, the trainer gave the dog a stay command and stepped off-camera into the elevator. On action, the actor stood for a few moments until the elevator door opened and then walked in with Madeline. Cut was then called and the handler returned Madeline to her mark.

As Mary Jane and Peter discuss their relationship over coffee, a man walks his Rottweiler A to B across the street in the background. Production assistants got the owner and his dog into position on set, and on action, they walked through the shot and are later seen reacting to the car crash. This crash was a special effect filmed against a blue screen and did not affect the animal in any way.

Mary Jane skips out on her wedding to express her true feelings to Peter. As she crosses Central Park, a couple walks a golden retriever and pigeons flutter around the fountain. This shot also involved extras walking their own dog, and according to our Animal Safety Rep on set, all went as planned. The pigeons in this scene were native to the area and not provided by the production.

At the end of the film, Spidey leaves M.J. to save yet another person in trouble. The multiple pigeons seen here were computer generated.