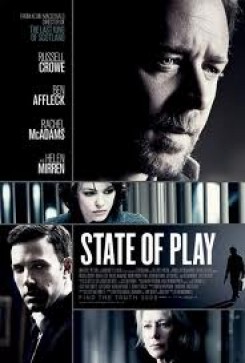 Congressman Stephen Collins (Ben Affleck) must admit to an affair once his mistress turns up dead. The police, with the help of some investigative reporters, try to solve the murder.

When Cal (Russell Crowe) arrives at a crime scene, a stray dog walks around nearby. A trainer placed the dog on its mark while another trainer dropped some treats along the path the dog was to walk. The second trainer stood off-camera and called to the dog. The dog ran the path, eating the treats, and ended up in the trainer's arms.

As Della (Rachel McAdams) conducts door-to-door interviews, a woman opens her front door and she and her dog briefly look at Della. The woman then quickly closes the door. This was filmed at the actual house where the woman and her dog live. They both just acted naturally as they do whenever there is a knock at the door.

The crabs and fish in the seafood market scene were filmed naturally at the market where they are housed. They were not brought in specially for the film.