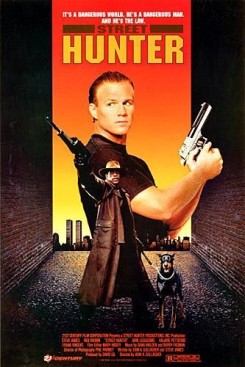 The Street Hunter of the title is Logan Blade, a former cop, who was relieved of his badge when he was framed in a set-up. Although he eventually was cleared, he resigned from the force and became a bounty hunter. His capable partner in all his new assignments is his magnificent Doberman, Munch. The duo live out of Logan's van and are determined to take the low-life off the streets and make the streets safe for people. They become involved in a turf war between two rival drug gangs. This is a slick action film with rough language, violence and nudity.

The beautiful Doberman was played by four different dogs. Munch skillfully performs a number of tasks such as attacking a drug dealer and holding him at bay for Logan. At various times he jumps, chases and growls menacingly at the villains. His scenes were shot mostly in cuts with the dog going from point A to point B. Munch's other behaviors such as growling or holding a drug dealer by the wrist were done in isolated close-ups with Munch responding to his trainer's off-camera commands.