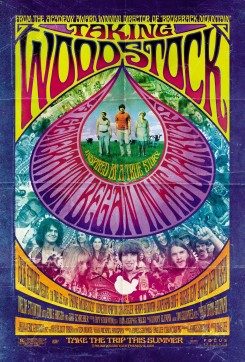 Hoping to save his parents' motel from going out of business, Elliot Teichberg (Demetri Martin) tells a concert promoter that the motel and surrounding swampland have enough room to host a concert for several thousand attendees. But the concert snowballs out of control, becoming the legend known as Woodstock.

During filming, streets were closed off to traffic, and grounds were checked ahead of time for hazards. Police and crew members sectioned off and secured the outdoor set.

Tisha (Mamie Gummer) holds her pet dog in her arms in several scenes. The actress and dog were introduced to each other and allowed to become familiar with each other before filming began. The trainer handed the dog to the well-rehearsed actress right before each take and instructed her on its proper handling. The trainer stood nearby as a precaution.

In a couple of scenes, dogs, a sheep and two police horses with riders are seen in the background, and a woman briefly pets a goat in the foreground. All cars and people appearing in the scene were brought in and placed on their marks first. Once everyone was in place and quiet, trainers brought the animals to their marks. The horses were accustomed to the mild action, and the horseback riders were experienced and well-rehearsed. The dogs, sheep and goat were all on leashes or lead ropes and held briefly by well-rehearsed actors instructed on their handling. The animals were only filmed for a brief time and trainers retrieved them immediately afterward. In one background scene, a man holds his Lab mix and later walks with it. The Lab's actual owner played the role of the man, and the two were accustomed to this mild behavior. In two other scenes, a man and woman ride up on horseback and then dismount; in one of these two scenes, the man remounts and rides off. A horse wrangler rode the horse up to the starting mark and then handed the horse to the actors moments before filming. The actors were well-rehearsed for this short canter and easy mount and dismount. Rubber mats were secured to the dirt ground for safe footing. All vehicles and motorcycles were kept a safe distance from the background animals.

In the beginning of the film, the bee on the flower was caught on film in its natural habitat.

Due to late notification or limited resources, American Humane did not monitor the scene in which a cow is milked or a scene showing birds being "startled" out of a swamp area.