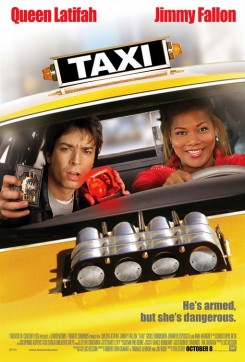 To thwart a robbery scheme hatched by a bevy of Brazilian beauties, "vehicular- challenged" officer Washburn (Fallon) enlists the impressive —though often terrifying — driving skills of cabbie/NASCAR aspirant Belle Williams (Latifah). In a high-speed game of cat and mouse, Washburn and Belle track down the models and crack the case with no help from the rest of the police force.

In one shot, a parrot sits on the shoulder of a man playing dominoes in front of a Lower East Side bodega. For this scene, a trainer prepped the actor with the parrot and removed all tags from the actor's shirt so the bird wouldn't bite or fiddle with him during filming.

The bird then is seen perched on a hanging fruit scale when officer Washburn backs his patrol car into the store, obliterating the parrot in an explosion of feathers. For this segment, a trainer placed the parrot on mark and the bird remained in place as the car came to a safe stop eight to ten feet from the bird. A flurry of prop feathers was released upon the car's impact with the bodega's display stands.