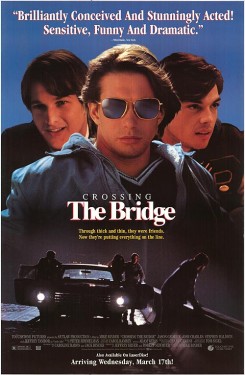 The Bridge is a story of three young men who can't come to terms with their lives as adults. They have difficulty dealing with the present and the future because they can't let go of the past when they were big men on their high school campus. Although in their early 20's, these best friends are unfocused and they work at menial jobs and spend their spare time drinking beer and aimlessly cruising around in the "War Wagon", their big blue Buick. Periodically, they travel from their home in Detroit across a bridge to Canada, where they frequent a strip joint. Knowing of their trips, a former classmate offers them a deal of a lifetime where they can make $10,000 if they will drop off some money in Canada and return to The States with a package of heroin. They accept the deal, but once in Canada, have second thoughts and want out. They're not going to be let off so easily and after a violent confrontation with the drug dealers, they are forced to keep their end of the bargain. This is a hard lesson in living and before they cross the bridge again, they will have, at long last, left their youth behind.

Animal action is minimal and is limited to some dogs barking in a yard of a country home at night. They are seen briefly primarily as atmosphere. Dogs are also shown in several other scenes at the border crossing as drug-sniffing dogs on leashes held by the border guards. At one point, the boys are asked to get out of the car by a policeman who brings a dog into the car to sniff for drugs.